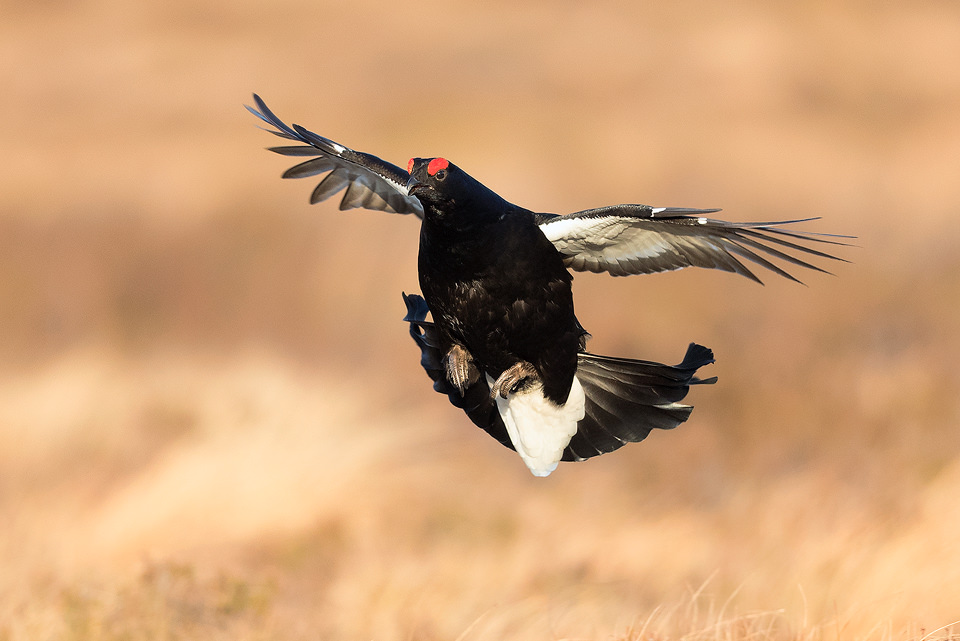 Black Grouse in Flight, returning to the Lek, Cairngorms National Park. Periodically some of the birds will fly off mid-lek giving the impression the action has finished. More often than not though the birds return offering the opportunity for some flight shots. The lek is one of the most incredible wildlife experiences I have ever witnessed, the sounds through the dark are out of this world!

Black Grouse are members of the grouse family; in the UK this also includes red grouse, ptarmigan and capercaillie. Black Grouse are found in woodland and open moorland in the upland areas of the Pennines, Wales and Scotland. Highly competitive birds, the males compete primarily for areas rich in food such as heather and bilberry bushes, ideal sites in which the female will produce a nest scrape for her eggs.

Male black grouse are instantly recognisable by their black and shiny blue plumage and their distinctive white lyre-shaped tails. Like many other grouse they also have red eyebrow wattles that can be raised when alarmed or displaying. The females, also known as gray hens, are speckled light brown and grey, perfect for keeping a low profile.

The black grouse courtship ritual begins in early Spring where they return to their historical lek sites early in the morning and in the evening. During the lek the black cocks fluff themselves up and fan out their tails, displaying to one another by running and jumping into the air with a series of flutters. When two males are evenly matched fights can break out and these can be very violent.